Difficult spelling words may seem to occur frequently in the English language. But they are not as frequent as you may think. About 10 per cent of them are unpredictable. The remaining 90 percent can be worked out with a little knowledge.

How your child copes will depend on what they already know and how they tackle a new spelling word. Adult students I have taught feel as if they are in a spelling minefield until they understand these different approaches to spelling …then they stop seeing spelling as being a huge obstacle.

How Difficult Spelling Words Can Be Spelled

How to Tackle Difficult Spelling Words

How To Solve Spelling Mistakes

Below is a table containing some examples of spelling mistakes and how I solve them with my students. In the boxes on the left you will find a misspelled word followed by the correct spelling. In the boxes on the right I have included explanations, tips and ways to learn them. 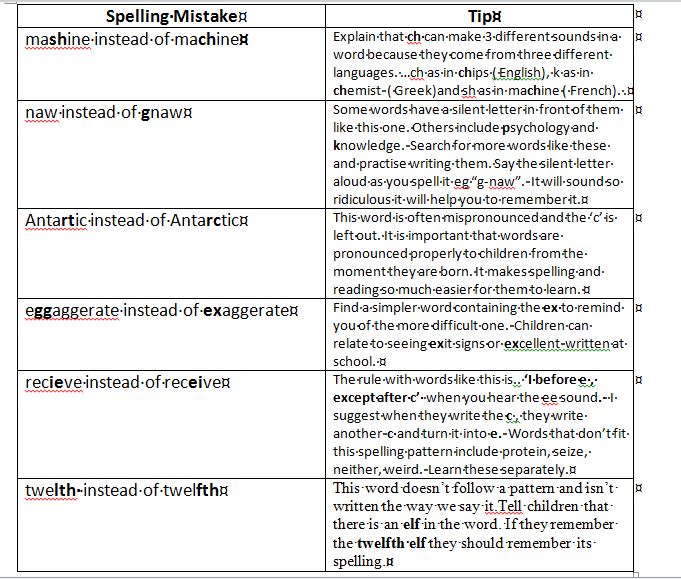 There are endless lists of what appear to be difficult spelling words...unfortunately, far too many to include and discuss on any one website. The best advice I can offer is that you help your child approach each tricky word armed with the the range of approaches mentioned above.

When I diagnose a student's spelling, I become a spelling detective. Often I discover they have repeated the same kind of mistake several times.

They might, for example, have difficulty with silent letters and consistently leave them out. Alternatively they might not be aware of the different ways of spelling the sound ear. Often there are several faulty patterns that need correcting. Once the student realises this, mistakes can be corrected quickly.

It is an exciting step forward. Almost immediately their self-esteem lifts and they tackle spelling as an adventure rather than becoming paralysed by it.

Go From Difficult Spelling Words to Correct Spelling of Words